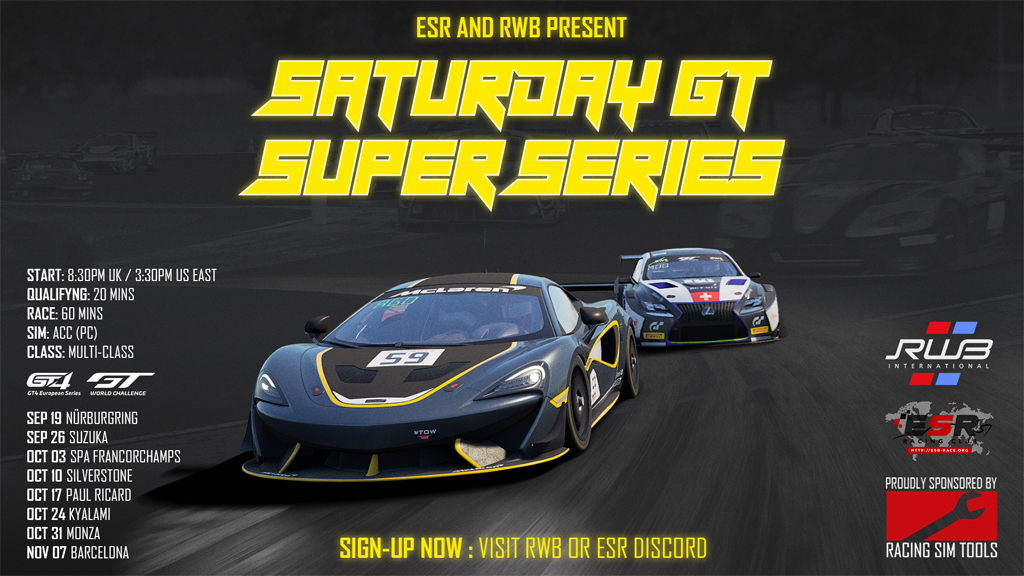 ESR and RWB are pleased to present the co-promoted series Super GT Saturday!

Multi is the word that best described this series; multi-communities, multi-class racing and multiple servers to facilitate multiple skill divisions.

This series visited some of the most historic tracks in the world and featured the legendary cars of the GT3 and GT4 classes. Online stat tracking allowed drivers to find their perfect competition level and provided the tightest field most have seen.

The races were one hour in length and will featured changing weather to challenge the best of drivers.

What were tiers used for in the league?
To accommodate a large number of drivers several tiers will run in parallel. Tiers are groups of drivers that are broadly similar in pace. This means everyone can expect closer racing and fewer blue flags.

How was it decided who went in which tier?
We record your best hot-stint (5 consecutive laps) time around Barcelona on our server: ESR and RWB Present Saturday GT Super Series Tiering Server. You can have multiple attempts in multiple cars, until tiering closes on the 15th of September at 8:30pm BST.

Must I do my hot-stint in the same car as the one I’ll use in the league?
No, you can use any car but it must be from the SAME CLASS that you have entered to race in.

Was it mandatory to set a hot-stint time to race in the league?
Yes, but if exceptional circumstances prevent you from doing this, please contact a member of the ESR or RWB admin team.

How large was each tier be and how many tiers were there?
Tiers were decided close to the league start date, depending on the number of entrants.

Was it possible to change to another tier?
It is expected that you will stay in your assigned tier. At the discretion of the race admins we may move you to another tier if there is a large mismatch in pace between you and the other drivers in your tier.