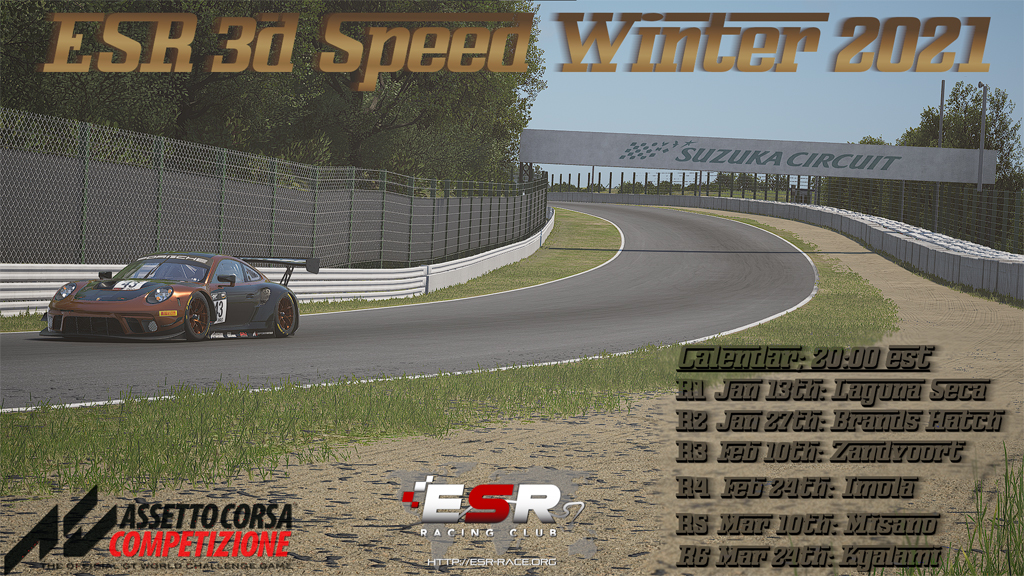 ESR proudly presents the next series sponsored by 3D Speed (The dynamic, custom racing rig designers) which will kick off in January 2021 and finish in March. The series borrows much from the most recent series which was highly successful.

So let’s get to the details……

We’ll be headed to some of the best tracks in Europe, North America and Africa this season. It’s the first time 3D Speed goes to Africa and we are very excited!

Unfortunately due some of the aspects to our servers we do not allow the RaceApp Self Service option. Please contact Meodread#3226 on the ESR discord server to join the series. You will need to have your car model, livery and car number ready to complete your entry as well as any team arrangements.

Alright, let’s get to the hot topic: Custom liveries! They are not allowed under any circumstances. Custom Liveries (yes even in game created ones) cause a processing spike for the server and disrupt other racers. As we do not have sponsorship deals or the size of grid that requires more diversity, we do not allow them by popular demand. Apologies!

A Mongrel team is a team that allows for multiple car models, for example a BMW/Lambo combination. These are allowed but must be teams that exist in the game to make commentary and identification quite easy.

As mentioned above, sign up for this series is by message to Meodread#3226 on the ESR discord server.